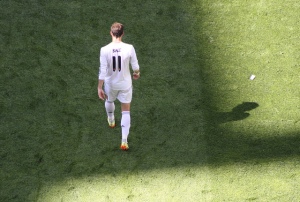 The shortlist for the BBC’s Sports Personality of the Year has just been announced (http://www.bbc.com/sport/0/sports-personality/30158881) and I hardly recognise anyone on it. I must admit that listening to the radio provides a similar experience for me these days. It seems I’m not quite as up on my gymnastics, swimming and skeleton as I might be (skeleton is one of the many strange events in the Winter Olympics – it’s the one where they hurtle down the slope of ice head-first on what looks like an elevated tea tray).

There’s only one footballer on the list: Gareth Bale. I was very surprised to learn that Bale is the first footballer to be shortlisted since 2009 when Ryan Giggs was not only nominated but won. I’m not sure if other countries have a similar event but I can’t imagine many places in which the national sport would be so significantly under represented. Indeed, Giggs is the only footballer to claim the award in the past decade.

I do not expect Bale to add to football’s tally. I think Rory McIlroy may be the early favourite while Lewis Hamilton’s world title triumph at the weekend may make him a contender. I’m not sure how big a following skeleton has in the UK so I probably wouldn’t put too much money on Lizzy Yarnold.

Last year’s winner of the Sports Personality award was Andy Murray (and a very worthy winner he was after his Wimbledon triumph) but he is not shortlisted this year so the trophy will pass to another sport.

Bale has certainly had a magnificent year. He’s settled incredibly well in Spain and looks every inch a star at Real Madrid, a club where Galacticos are expected to shine very brightly. For a sense of how good a player Bale is, just look at what’s happened to Spurs since he left.

He’s produced excellent performances for Wales too of late and I hope he gets the opportunity to display his talent at a World Cup or European Championship.

There’s been some speculation that Bale may return to England in the summer, possibly to Manchester United. He would be a great signing for Van Gaal but I can’t see him wanting to leave Madrid so soon and it would seem strange to me if Real were tempted to part with him at this stage.

The sale of Bale would surprise me but even more surprising was the discovery that tickets for the Sports Personality event, being hosted in Scotland this year, are priced at £45, £55 and £60 plus a 10% service charge. Who on earth is paying that much to go and watch Gary Lineker play some video highlights and hand over a few awards?

It would cost less to watch Bale play at the Bernabeu.