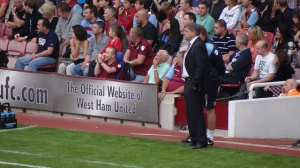 West Ham – David Cameron’s a fan. Or maybe not.

I was watching West Brom v Liverpool this weekend and so, I presume, was Brendan Rodgers. He was certainly present on the touchline but the game he witnessed seemed to be a bit different to the one that was beamed into my living room.

Rodgers described Liverpool’s performance as “outstanding,” a claim that I would describe as outlandish. There was one genuinely outstanding moment when Ibe burst past several opponents and cracked a shot against the bar but otherwise Liverpool lacked the creativity to break down the massed ranks of Albion’s defence.

Liverpool enjoyed plenty of possession (a whopping 74% apparently) but did little with it. Coutinho found himself dropping deeper and deeper in a bid to try and influence the game and West Brom were delighted to watch his gradual retreat away from their penalty area.

Gerrard was composed but not commanding while alongside him Henderson was demonstrating that a £100k/week footballer is not necessarily an outstanding footballer. To be fair, Henderson is much improved since his arrival at Anfield but he has a long way still to go before he starts bossing games consistently in the way that Gerrard did in his prime.

In the post-match interview Henderson said: “we’ve just got to keep playing like that until the end of the season.” That should please Hull ahead of tonight’s game.

Louis Van Gaal meanwhile only had to watch his side warm-up to pass judgment on their performance in the 3-0 defeat to Everton. “I had already the feeling and my colleagues Ryan Giggs and Albert Stuivenberg had the feeling because the warm up was not so good as usual.”

I wonder if Van Gaal watched the warm-up or just relied on reports from his assistants. It’s unusual for a manager to watch the warm-up and even more unusual for them to conduct it. They probably should though, at least every so often, just to keep the players on their toes.

Warm-ups have become more sophisticated over the years. I remember the days when they consisted of little more than a few leisurely stretches and then lining up to batter the ball at the goalkeeper (usually with about four or five people shooting at once). Now there’s generally much greater intensity and some small sided games to simulate what players are about to encounter.

I suspect that Van Gaal will at least have warmed his players’ ears up at half-time with some strong words on their performance.

Arsenal fans found themselves watching and chanting “boring, boring Chelsea” at the weekend as their side were held to a 0-0 draw by Mourinho’s champions-elect. The Chelsea manager’s response was classic: “Boring is 10 years without a title.” 1-0 to the Mourinho I think Arsenal fans.

John Terry later stuck the boot in again, saying: “Possession and tippy-tappy football’s great, but if you are not winning games you’re not going to win the league.” Tippy-tappy is one of the great insults of British football, often employed at youth games by the ‘let’s get it up the park’ brigade on the touchlines.

There’s no doubt that Wenger aims for Arsenal to play in the tiki taka style of Barcelona but the line between tiki taka and tippy-tappy is a fine one. Even Barcelona these days are opting for a more direct and muscular version of tiki taka. Arsenal should take note as the Gunners still lack the necessary firepower to win the league.