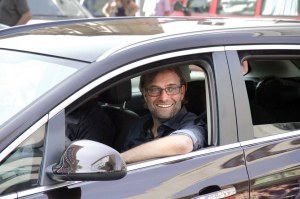 The self-proclaimed ‘Ordinary One’ swept into Liverpool last week and so began a new era at Anfield. I’m not sure if the Liverpool owners read this blog – they probably don’t have a lot of time in between approving overpriced and underwhelming signings – but if they do they may have noted that in my previous post I mentioned that I had lost all faith in Rodgers and his methods.

Apparently they have now as well although I suspect the availability of Jurgen Klopp was a factor in that loss of faith. Although it rather begs the question as to why the change wasn’t made in the summer, before Rodgers went on another summer spending spree that displayed all the clarity of thought and subtlety of judgement of an overexcited contestant on Supermarket Sweep.

Liverpool’s squad is hardly brimming with world class talent and Klopp inherits a side that is not exactly overflowing with confidence either. The Rodgers era at Anfield resembled Michael Jackson’s moonwalk: there was the appearance of moving forward but in reality we were going backwards.

Klopp entered the fray at White Hart Lane at lunchtime on Saturday after a couple of confident press conference performances. I entered a pub in Dunfermline with my brother at the same time, having arrived in Scotland the previous evening. With the haggis on order, I turned my attention to the big screen to discover what Klopp was about to serve up.

By the time the Knickerbocker Glories arrived (my brother, he practically forced me) there were just enough signs of encouragement to make the meal a modestly happy one. There was perspiration aplenty with a small side of inspiration. In the build up to the game, Liverpool players had spoken of the new boss demanding a few extra yards. In his first game, he got them – Liverpool were apparently the first team to outrun Spurs this season in terms of distance covered.

They ran, but what they were unable to hide was the obvious lack of quality that I referred to above. Coutinho is an honourable exception, but the supporting cast don’t give the impression of having fully learned their lines. Of course Klopp only had a few days to work with the players following the international break so it’s hardly surprising that the new script has not yet been mastered.

In that context a 0-0 draw away at Tottenham represents a decent enough start. Many teams will leave the Lane with less this season. The most encouraging sign came as the Liverpool team left the field. Klopp was there on the pitch, cajoling them, arm around half of them, deep in conversation. The players all looked appreciative and respectful. There’s no question that this is a man that they want to play for already.

How many of those players Klopp ultimately wants to play for him at Anfield remains to be seen. The truth is that not many of them are good enough to turn Liverpool into title challengers and regular participants in the Champions League. Klopp undoubtedly is good enough but to fulfil his ambitions he’ll have to succeed where Rodgers failed most spectacularly – in the transfer market.

The Sky pundits had a bit of a disagreement over the initial Klopp effect: Neville suggested it was little more than a typical new managerial bounce; Carragher claimed that the German had already begun to make his mark on his new squad. I tend to agree with the latter view.

It’s not surprising that a new manager should have some positive effect when taking over. A new voice and some fresh ideas on the training ground should be enough to achieve that in the very short term. Over the slightly longer term though, an unchanged squad of players are likely to deliver a broadly similar set of results.

That’s not to suggest that managers wield only limited influence, far from it. Indeed, I think the best managers have a justifiable claim to be the best paid employees of their clubs. I doubt that Klopp currently is at Liverpool but he’s almost certain to be the man most influential in determining Liverpool’s results between now and the end of the season.

On Saturday I was quite impressed by the new manager effect that Klopp brought to the Liverpool dugout. On Sunday, I went to Tannadice to observe the effect of another new manager: Mixu Paatelainen at Dundee United.

It was also my son’s first ever football match. A big occasion then, and it will be the subject of my next post.