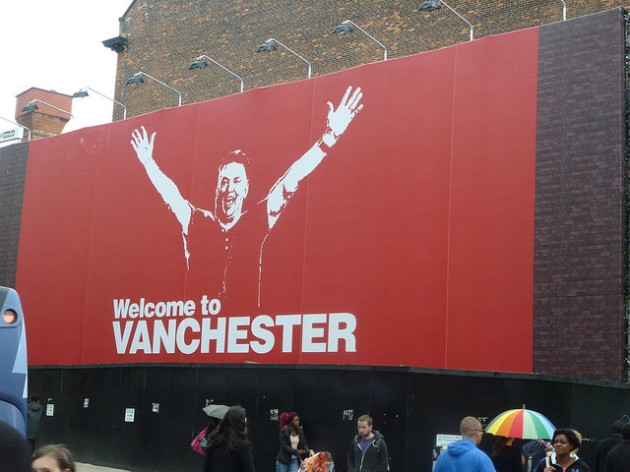 Liverpool v Manchester United, or was it the Dog & Duck v The Red Lion as Gary Neville suggested a while back? (Incidentally, if he doesn’t start getting a few wins in Valencia soon then he might find his next managerial job is a little closer to the pub leagues). There’s no question it was a decidedly uninspiring game.

The fact that both sides had drawn 3-3 the previous midweek suggested that the game would at least involve plenty of incident and perhaps a fair few goals. Alas, not so much.

Jurgen Klopp seems to be finding the English winter rather harsh and appears on the touchline with more and more layers of clothing. He increasingly resembles a budget airline passenger who’s attempted to beat the checked luggage charge by putting on all the items in their suitcase.

Moreno’s hairdo also causes me some wonder: largely regarding the essentially unfinished nature of it. Did a fire alarm go off halfway through and the cut was never resumed? Was the barber an Everton fan and only realised who Moreno was at the midpoint of the cut, upon which he downed tools?

Equally bemusing was the sight of Jones, Carrick, and Rojo sat (or rather stood such is the fashion again) in the stand with the away fans. Presumably a plush seat in the director’s box with a great view wasn’t so appealing since they’d be watching Manchester United – a less than riveting experience at the moment as Paul Scholes never tires of reminding us.

Fergie time at Old Trafford these days is nap time.

The game started surprisingly gingerly and although Liverpool were on top it was obvious just how much Coutinho is missed when absent.

Not long into the game, Fellaini went down (as it were) following a clash of heads with Lucas. Co-commentator Jim Beglin was moved to observe: “you just hope for Fellaini’s sake that his hair cushioned the blow.” Indeed, Jim, we can only hope.

Shortly afterwards, Lallana missed a sitter when clean through on goal. As the ball bounced up he headed it weakly at De Gea, making no attempt at the lob which was the glaringly obvious option in the circumstances.

Klopp was his usual animated self on the touchline. He definitely takes the kick every ball approach to coaching. Van Gaal sat mostly impassive throughout as he tends to. He recently said that managers screaming on the touchline have little effect and I suspect he’s right – it seems to me more of an outlet for their own nervous energy than anything else.

Still, sitting stony faced while your team produces another stony performance is not generally a good look for a manager.

I counted the number of saves required of both goalkeepers in the first half; it was not a taxing effort mathematically, there was one.

A more taxing question: Jordan Henderson, what is he? He’s not a playmaker, that’s for sure although he sometimes forgets that fact and tries to play Gerrard-esque long passes. They mostly endanger the front few rows of the crowd. He’s not a ball-winning defensive midfielder.

He does run around a lot. With the effort demanded by Klopp, maybe that’s enough for now but he’s a poor man’s Stevie G – the poor man being whoever sanctioned the transfer that involved paying Sunderland around £17 million for his services.

Talking of overpriced transfers, that brings me to Lallana and Clyne, both of whom seem to sum up the Rodgers era to me. They’re both decent enough footballers but no more than that. Lallana on his day is actually pretty good but most of ‘his days’ seem to have been used up when he was a Southampton player. I can only hope that Clyne’s day is still to come.

Too much money spent on not nearly enough quality. That was what happened under Rodgers.

Van Gaal has not exactly been reluctant to get the company cheque book out but as with so many first halves this season, the return on investment was nil in a very literal sense.

There were thus not many highlights at halftime, a shame for Paul Parker who does some of the analysis here in Malaysia. He was poised at the giant iPad (or whatever it is) that all studios must seemingly possess by law now, but no amount of knob twiddling could conjure up much to ‘highlight’ from a pretty forgettable opening 45 minutes.

The second half began with an example of Klopp’s love of near post corners. I think every Liverpool corner of the Klopp era has been chipped just short of the near post. I don’t recall any goals, or even highlight worthy chances, materialising as a result.

Beglin, not remembering the Gary Neville quote as accurately as me, pondered: “what did Neville describe this fixture as? The Dog and Duck v the Prince of Wales?” The Prince of Wales? I think Jim must have been in for a good few toasts to the prince before this particular co-commentary gig.

Soon he was offering more insight, on Rooney playing at 10 this time: “as he gets older, that’s probably his best position.” You mean the position in which he’s played almost his entire career Jim?

The main commentator (I can’t remember who it was) suggested that the game had “rather trundled.” It was an apt description. Indeed the combination of a tropical storm plus a paper cut suffered by my wife meant that there was more blood and thunder at my house than at Anfield that day.

Then Rooney scored. A corner that made it beyond the near post (take note Mr. Klopp) was headed towards goal by Fellaini. The remarkable thing was not that the Belgian won the header but that he did so while surrounded by four Liverpool defenders. The header crashed back off the bar and Rooney hammered in the rebound.

One of those four Liverpool defenders might have been just slightly more usefully employed attending to Rooney.

Van Gaal still didn’t leave his seat. He just made a note. I suspect he’s writing a novel in preparation for life after management.

There had been much speculation that defeat at Anfield would have brought the Dutchman considerably more time to spend with his novel. A win saw him cling on but subsequent defeat at home to Southampton has again raised speculation to fever pitch.

I’m amazed that he’s still in the seat that he’s so reluctant to leave each match day.

There doesn’t appear to be a long-term future for Van Gaal at Manchester United but there surely is for Klopp at Liverpool. Progress has been stuttering so far but progress it undeniably is. Manchester United meanwhile are going backwards as steadily as their passing.

Liverpool may have lost this battle, but the more optimistic set of fans in the ground, even at the end, were not those sat alongside Jones, Carrick, and Rojo. 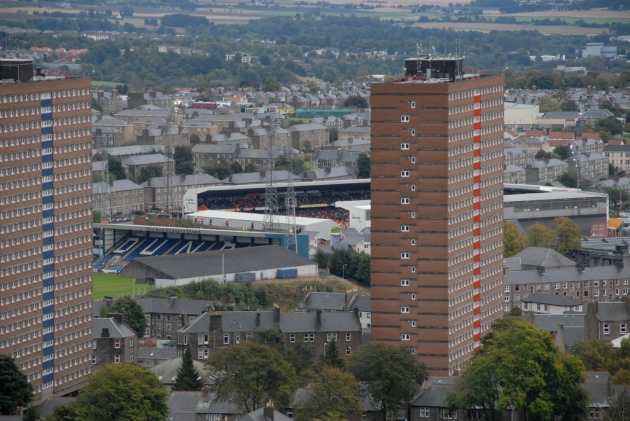 Happy New Year readers. 2016 hasn’t started quite as well for me in a footballing sense as 2015 did. On the 1st of January 2015 I was at Tannadice to watch Dundee United triumph over Dundee in the derby, 6-2.  It was a victory that even prompted some optimistic talk of us joining Aberdeen in a ‘new firm’ bid to challenge Celtic for the title.

Sadly it turned out to be the sort of optimism that is so often found in those activating gym memberships at this time of year; it had mostly evaporated by the end of January (by which time three of our best players had moved to Celtic).

I was not in Scotland this festive season and thus I wasn’t at Dens to watch us lose the New Year derby 2-1, a result that leaves us floundering at the bottom of the league – 11 points behind Kilmarnock who occupy the position above us. If a week is a long time in politics, a year is an eternity in football.

In that period, the manager has been sacked and there’s been a major overhaul of the squad, not exactly for the better. It’s been a bit like an episode of 60 Minute Makeover in reverse. You don’t need to be as serial a pessimist as Private Fraser in Dad’s Army to nevertheless reach the conclusion that we appear to be doomed. Captain Mainwaring couldn’t save us now.

Considerably more hope is invested in Jurgen Klopp saving Liverpool. So far, the German has made a good if slightly inconsistent start. West Ham v Liverpool was the first game that I watched in 2016 and it didn’t bring much cheer for a Liverpool fan. West Ham won 2-0 and did so comfortably.

In press reports of the game I read that Klopp was angry at his side’s failure to give their all. One newspaper quoted him saying that they had only given “95%” while another suggested that he had said “90%.” If there’s only 5-10% more to be had from that side then I’m afraid we’re back in Private Fraser territory. I would say it was a 70% performance at best.

Somebody should really check Lucas’s passport because it looks increasingly implausible to me that he can actually be Brazilian. I’m almost certain that if you picked a random guy of the Copacabana they would display greater skill than our number 21.

Then there’s Clyne: a half-hearted sort of a full-back. He doesn’t mind going forward (although he shows only a moderate talent for it) but he’s bit less sure of things when called upon to perform defensive duties – a not altogether uncommon occurrence for a defender. In this aspect of the game he’s something of a liability, seemingly regarding it as all a bit inconvenient.

He was out-jumped for both West Ham goals. Well, I say out-jumped, that’s actually a rather generous description of his efforts (well, I say ‘efforts’) to disengage his feet from the pitch. I think on one of the two occasions in question he got high enough that a slow motion camera would have been able to capture at least half of one of his studs.

I once played for a manager who bemoaned such instances with the phrase: “couldn’t get a Sunday Post under you there.” The insertion of a Sunday Post beneath one’s feet would not require a very spectacular, salmon-like jump.

One Liverpool player who could not be accused of lacking effort in his performance was Benteke. Sadly most of that effort was entirely ineffectual. Klopp has demanded more of his young striker in recent weeks and Christian ran around looking as lost as your average KL taxi driver (for those of you who haven’t been in a KL taxi, that’s generally quite lost).

The overall performance had all the huffing and puffing that we’ve already come to expect from a Klopp side but nothing appeared very much at risk of being blown down.

Much of the fallout from the game has focused on the spate of hamstring injuries that the squad has suffered; an occurrence that Sam Allardyce suggested was due to Klopp’s preferred high intensity playing style. Klopp’s response was something along the lines of: “pull the other one Sam.”

The fortunes of Liverpool and Dundee United are certainly pulling in different directions. There’s no question that Liverpool are improving under Klopp and there is a lot to be excited about at Anfield in 2016.

Dundee United on the other hand, are on a run of results comparable to that of Donald Trump’s barber. 2016 is looking like a relegation year for us but we football supporters are required to make the same resolution ever year: we’ll support you ever more.