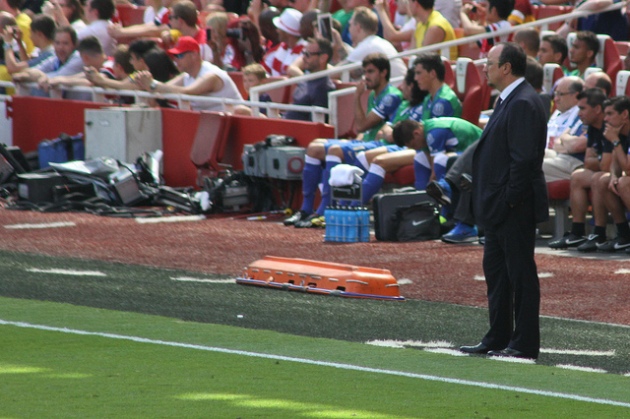 Rafa’s back. Steve McClaren’s reign as Newcastle boss didn’t last long and it yielded few points. Newcastle find themselves in the relegation zone with nine matches left to play. The final two games of their season are at home to Tottenham and Manchester City so that makes April a rather important month for Benitez.

The Spaniard’s recent career trajectory is Real Madrid – Napoli – Newcastle. Or to put it another way Ronaldo – Higuain – Mitrovic. That’s the sort of downhill momentum that a luge team would be pleased with. I hope Benitez has topped up his tan in his previous two gigs because as Gazza memorably sang, it’s mostly “fog on the Tyne.”

The sun doesn’t shine much in Newcastle at the best of times (though has there ever been a set of fans more inclined to attend matches half naked? Ha way the tops) but there seems to have been a persistently dark cloud hanging over St. James’ Park for a long time now.

Newcastle fans are among the most loyal anywhere but their club is going nowhere. Boardroom bungling has certainly been a factor as Newcastle have lurched from one crisis to another.

Owner Mike Ashley has been summoned to appear before Parliament’s Business, Innovation and Skills select committee to give evidence about the treatment of workers at his firm, Sports Direct. A recent BBC investigation raised concerns about ‘the treatment of low paid workers and enforcement of the national minimum wage.’

In response, Ashley invited MPs to visit the Sports Direct warehouse in Shirebrook, an invitation that members (honourable and otherwise) appear to have declined. He did not invite them to visit St. James’ Park, where the average wage must be considerably higher than the minimum. The effort some of those players are displaying in return for their wages could be described as minimal though.

Had MPs visited Newcastle’s ground on Januray 12th this year they would have seen a banner unfurled by supporters that read: ‘#SportsDirectShame’. A protest isn’t really a protest these days if it doesn’t include a hashtag.

What those supporters have witnessed on the pitch has been pretty shameful and I wonder if any have written to their local MP. That would be Labour’s Chi Onwurah, who happens to serve on the Business, Innovation, and Skills Committee that are so keen to make the acquaintance of Mr. Ashley. Perhaps they will be conducting an investigation to see if there’s any evidence of business, innovation or skills at Newcastle FC.

The committee are probably more concerned with assessing the implications of a potential Brexit from the EU. Newcastle fans fears revolve around the Nexit question: will Newcastle exit the Premier League this season? I doubt they spend very much time contemplating Europe at the moment.

In my view, Villa are already long gone, and Swansea I expect to be safe so that leaves two from Newcastle, Norwich and Sunderland. Newcastle v Sunderland this weekend is a huge game. The home side will be hoping for a Benitez bounce as without it they are likely to soon be tumbling through the relegation trapdoor.

Rafa specialises in making teams hard to beat and Newcastle could certainly use a little of that right now but the air of defeat that lingers around the club is as thick and smothering as the Tyne fog.

Newcastle fans must now be used to flirting with relegation but this year I think they will consummate that relationship. The facts of life for those supporters cannot be denied; their club is in big trouble.