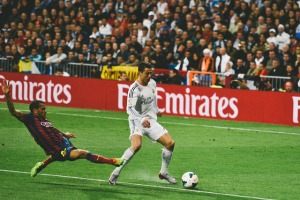 Last night I watched Getafe v Real Madrid including the recent recipient of Fifa’s Ballon d’Or award Cristiano Ronaldo. Real won 3-0 and Ronaldo helped himself to a couple of goals bringing his tally to 36 already for the 2014-15 season. A few hours later Messi scored a hat-trick (incredibly, the 30th of his Barcelona career) as Barcelona won 4-0 at Deportivo La Coruna.

Separating these two great players is generally not very easy but the Ballon d’Or voters seemed to find it quite straightforward as Ronaldo won with a convincing 37.66% of the vote compared to Messi’s 15.76% (putting him just a tiny margin ahead of Neuer who polled 15.72%).

I think Ronaldo was a worthy winner but I’ve no doubt that Messi would have triumphed if Argentina had won the World Cup. Ronaldo’s World Cup was a very disappointing one but there’s no doubting how brightly he’s lit up the world stage with Real Madrid – almost as bright in fact as the suit that Messi wore to the award ceremony, the choice of which merits some considerable doubting.

Perhaps shaken by Messi’s sartorial selection, Ronaldo emitted a very strange screech towards the end of his acceptance speech. Quizzed about it later, he said: “The scream? The players know I always do that shout when I score a goal or when we win – it’s our team shout.” It may have a place as part of a goal celebration (although personally I’ve always favoured more understated approaches) but in the acceptance speech context it was quite ridiculous.

It was of course very Ronaldo – a man that’s already built a museum dedicated to himself and someone who removes his shirt almost as readily as Matthew McConaughey. Yes, Cristiano, you have a six-pack and rippling muscular physique but then you’re one of the world’s highest paid athletes, surrounded by trainers and dieticians, so maybe that’s what should reasonably be expected.

As Balotelli (another of football’s vain brigade) once asked: “when a postman delivers letters, does he celebrate?” Next time you score or win an award Cristiano, try just smiling and raising your hand in the way that Alan Shearer used to.

Accepting his award, Ronaldo said: “It has been an unforgettable year. To win this trophy at the end of it is something incredibly unique.” Well, not that unique in all honesty since he won the same trophy last year.

There were a few other interesting things to emerge out of the Ballon d’Or voting. Roy Hodgson opted for Mascherano, Lahm and Neuer, somehow overlooking both Ronaldo and Messi. Perhaps this was part of some new FA diversity scheme to promote inclusion for midfielders, defenders and goalkeepers. Jamie Carragher tweeted: ‘love Roy Hodgson going for a clean sheet with his Ballon D’or picks.’

The Fifa team of the year for 2014 was also announced and there weren’t too many surprises other than the inclusion of David Luiz at centre half. Luiz is actually quite a decent footballer; the problem is that he plays in defence despite displaying little aptitude for defending. In my first blog post I crowned him the ‘defender who absolutely refuses to accept that he’s not a striker’ and I suspect that being picked in defence for the Fifa XI will not prompt him to think differently.

There’s no World Cup this year so the 2015 winner is likely to be judged almost solely on domestic performances. Just two and half weeks into the new year, who would bet against it being a two horse race again? Perhaps only Roy Hodgson.