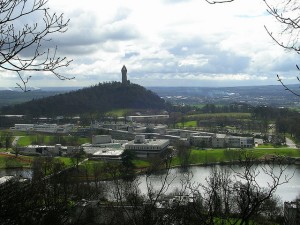 It was Saturday the 13th of November 1999. I was in my first year as an undergraduate at the University of Stirling. Scotland were playing England at Hampden in the first leg of the play-off for the Euro 2000 tournament that was hosted in Belgium and the Netherlands.

I wasn’t a member of the Scotland Supporters Club back then so there was absolutely no chance of getting a ticket for the game. My room in my halls of residence didn’t have a TV and anyway I think the game was on Sky. The few people I knew with TVs in their rooms didn’t have satellite TV.

No problem though, the sports bar at the student union was showing the game. They’d been advertising it for several weeks.

On a normal Saturday as a first year undergraduate I would not have been up before noon. The game kicked off at 2pm. The night before, anticipating that it might be busy, a group of us discussed what time we should head over to the pub. I suggested noon should be fine, a full two hours before kick-off. The suggestion was met with incredulous looks.

I thought I’d been rash in proposing that we go so early. After all, that would require getting up before noon. “I’m going to go over and check at nine tomorrow morning,” one of my friends said. It’s just as well he did.

Before nine the following morning he was banging on my door. “There’s a queue already, let’s go.” I stumbled out of bed. 30 minutes later I had joined him and several other friends in the queue. It stretched all the way around the building and halfway down the main drive of the campus.

Since it was November in Scotland it was freezing cold. We shivered and sought warmth in song. The sports union pub wasn’t due to open until noon – two and a half hours to wait. I think someone had a packet of wine gums; that was all we had to sustain us.

Of course the queue wasn’t moving because there was nowhere for it to go until the doors opened. We speculated about the line-ups and made our predictions for the score. I tipped 1-1. There was confidence but mostly nerves (and boredom).

Finally it was noon. Still we waited. Anguished glances up the queue. “What’s going on?” grew to a chorus. At last, a solitary step forward; one small step for me but one giant leap for the queue.

About 20 minutes later we were inside. It was 12.30. To say we were packed in would be something of an understatement. I had a sense that various health and safety stipulations were probably being breached. The bigger concern was how to get to the bar to order a beer and a burger. The tallest in our group (not me) was dispatched on this mission.

He returned with beers and the news that the burgers would take about an hour. Apparently the kitchen was a little overworked. In the end the burgers took almost 90 minutes to arrive.

Scotland were two goals down by then. Scholes scored both. On each occasion our defence granted him a far more generous amount of space than had been provided to us in the pub.

The team battled on strongly, played reasonably well, but didn’t manage to score. 2-0 was the final result. We walked back dejectedly.

The second leg at Wembley was on the Wednesday night and it was on either BBC or ITV (I don’t remember which). That meant we could watch it in the TV room in our halls.

The general consensus among pundits seemed to be that the tie was pretty much over. A 2-0 win away from home was certainly a good result for England. At Wembley we were immense though. Don Hutchison scored to put us ahead just before half-time. Suddenly it looked possible. I recall this as one of the best games that Barry Ferguson ever played, he completely dominated the midfield.

The longer the second half went on the more desperate we all became. Then, with 10 minutes to go, a flick on from a corner and there was Christian Dailly, launching himself into a diving header from six yards out. Completely unconsciously, I mirrored his effort. This meant that I had launched myself at the TV.

Seaman just got a hand on it and kept the header out. I saw that just before the sticky floor of the TV room met my face. Dailly picked himself up. I picked myself up and sat back down. 10 minutes later it was all over and we were out.

Scotland face England tonight in a friendly at Celtic Park. It’s the first time the two countries have played each other in Scotland since that November day in 1999. Tonight I have the option of watching at home but it will require me getting up at 4am, which is about the equivalent of getting up at 9am as an undergraduate.