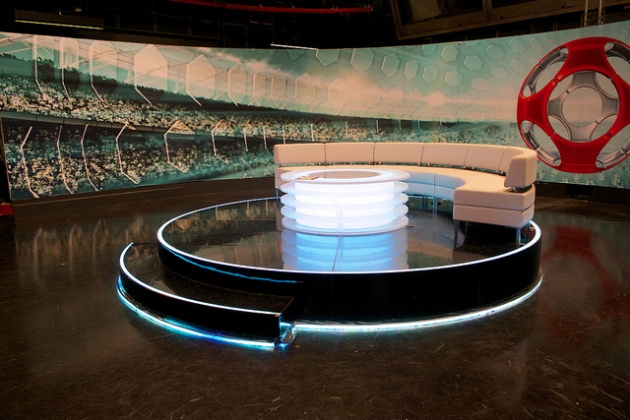 Match of the Day studio. Photo by Alexander Baxevanis, http://www.flickr.com

So Match of the Day is 50. It is quite simply a British institution. Especially for those of us who grew up without the saturation coverage of football on TV that exists today. It’s a coming of age moment in the UK to finally be allowed to stay up to watch Match of the Day. I don’t actually remember how old I was when that moment happened for me but I do remember the feeling that an important milestone in life had been reached.

A lot has changed since the programme made its debut in 1964 and not just in football. In 1964, Winston Churchill retired from the House of Commons, the Forth Road Bridge opened, The Sun newspaper went into circulation, and the Beatles had a Christmas number one with I Feel Fine. The world record transfer fee at the time was £250,000, paid by Roma to Mantova for Angelo Sormani (no, I’ve never heard of him either). The British transfer record was the £115,000 paid by Manchester United to Torino for the services of Dennis Law.

Apparently, a season ticket to watch Law at Manchester United could be purchased for around £10 – many Manchester United fans probably feel that would be a reasonable price to watch their side for a season now given the level of performance they’ve been producing over the past year or so.

The legendary Law was voted European footballer of the year in 1964 and remains the only Scot to have been awarded the Ballon D’Or. Dalglish finished second in the voting in 1983, losing out to Platini. It’s not altogether clear why Scott Nisbet was overlooked in 1993, a player about whom Walter Smith said: “every pass is an adventure.”

Match of the Day’s first adventure came at Anfield on 22 August 1964. Liverpool beat Arsenal 3-2 and 20,000 viewers tuned in. Those were the days of football at 3pm on a Saturday afternoon and of an average weekly wage in English football’s top division that was less than £40. Today, games are played almost every day of the week and absolutely average players earn £40,000 per week. Those things are made possible, and to some extent necessitated, by the fact that football has grown rich thanks to TV.

Most ‘matches of the weekend’ no longer take place at 3pm on a Saturday (in fact increasingly rarely on a Saturday at all) and so Saturday night highlights are not always the highlight that they once were. Broadcasting football has become a fiercely competitive business and to mark Match of the Day’s 50th year, BBC bosses have given instructions to pundits to be more opinionated and animated. They did this after signing Phil Neville as a pundit which is a bit like a manager saying his side needs to score more goals and then announcing the signing of a couple of centre halves.

Mark Cole, head of football at the BBC (that sounds like a great job by the way and an impressive business card) said recently: “anyone on that panel of punditry should have played top-flight football and that’s our position.” So does that mean that Mourinho and Wenger need not apply?

It’s well accepted that great players don’t necessarily make great managers and most footballers who currently offer their animated, or otherwise, opinions are not really very good pundits (Shearer barely became animated when he scored far less when dissecting the finer tactical details of Stoke versus West Ham). If anybody can remember anything remotely enlightening courtesy of Mark Lawrenson then answers on a postcard please or preferably in the comments section below.

Such has been the poor overall quality that Hansen came to be seen as something of a sage despite most of his contributions amounting to little more than correctly labelling terrible defending as “terrible.” He also famously and wrongly proclaimed that “you can’t win anything with kids” which wasn’t true about the Manchester United side he was referring to or indeed the Dundee Sunday Boys League where my own (modest) skills were honed.

Without doubt the best pundit in the business is another man whose skills first flourished in Dundee: Gordon Strachan. What makes Strachan the perfect pundit? Well, for a start, he’s genuinely insightful. He has a wonderful knowledge and appreciation of the game, especially its tactical variances and subtleties. He tells it like it is but without going over the top. He can judge a player, team or manager harshly yet still sympathetically. Listening to Strachan I generally learn something and that is almost never the case with any of the other pundits currently occupying their comfy sofas.

Oh, and Strachan is also witty; hilarious in fact. He brings humour to his analysis and this quality has been most apparent in his post-match interviews as a manager. He was once asked: “So, Gordon, in what areas do you think Middlesbrough were better than you today?” His reply: “What areas? Mainly that big green one out there.”

One reporter seeking a post-match comment asked him: “Gordon, can we have a quick word please?” Strachan said: “velocity” and walked off. That’s just brilliant. I would love to go to the pub with Strachan after a game and discuss it over a pint or two. How many other pundits would you say the same of?

There’s a gap in the market for a football show that has the feel of intelligent people discussing the game in a way that can be both serious and light-hearted. Sky’s Soccer Saturday does the pub-like banter pretty well but falls rather short on insight despite having a truly great presenter in Jeff Stelling.

One of the interesting developments of recent years is that sources of really intelligent analysis have emerged from outside the game. The best example of this is Michael Cox, whose website Zonal Marking (www.zonalmarking.net) was ‘inspired by the standard of punditry on British television,’ that is to say how ‘terrible’ it is and Cox’s correct assumption that he could do much better. The huge popularity of the site, and the fact that he now writes for many other publications, indicates that thousands of football fans want the type of analysis offered by Zonal Marking.

Instead of providing that analysis most football shows have decided that the answer lies in massively increased use of technical gadgetry (Match of the Day is actually an honourable exception to this for the most part). What this seems to involve is a couple of confused looking blokes standing in front of something that resembles a gigantic iPad and getting carried away with placing circles around players, drawing arrows, and highlighting random sections of the pitch.

Usually, after an inordinate amount of knob twiddling and freeze framing, the pundits will conclude with something like: “so yeah, Rooney’s taken a touch and smashed it into the net.” Well, thanks lads, I’d spotted that all by myself when you first played the video of the goal at normal speed and unadorned by your creative markings.

So if the BBC is looking for advice on the next 50 years of Match of the Day (they haven’t asked incidentally but that’s never stopped me dispensing advice in the past) I would suggest: forget technology, hire Gordon Strachan, and look for real intelligence rather than just top-flight football experience in your pundits. Otherwise, there’s a risk of Match of the Day suffering the same fate as another BBC show that launched in 1964 – Top of the Pops.