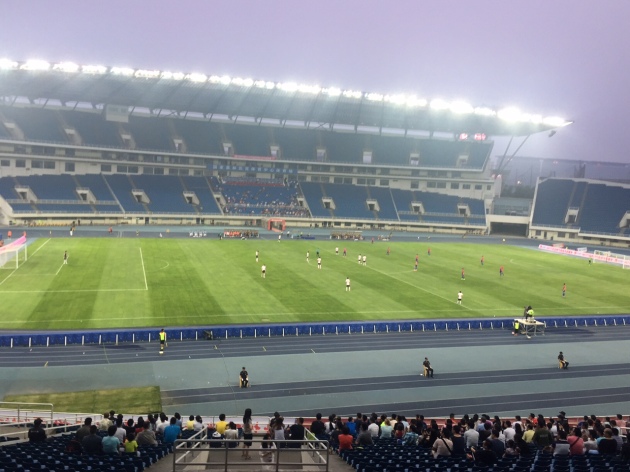 It was a hot Sunday evening, softened slightly by a hint of breeze, when I arrived at the Olympic Sports Centre Stadium in Beijing. That’s not the famous ‘bird nest’ one that was the centre piece of the Olympics, but a smaller one just across the road.

The purpose of my visit was to sample some local Chinese football, in this case Beijing BG (or Beijing Enterprises Group to give them their full name) versus Wuhan Zall in the second tier of China’s football pyramid.

I purchased a ticket for 30 yuan (about £3.50) a transaction made much easier by the fact that one of the people working in the ticket office spoke reasonable English, a rare occurrence over the course of my 10 day stay in China.

What happened next was also a rare occurrence, at least for me. A long straight walkway led from the ticket office to the stadium. About halfway down it I encountered a gentleman (who I guessed to be in his early 60s) going through an elaborate workout routine with a massive whip. As he lashed it left and right, the ground cracked explosively. It was a fairly terrifying sound.

This performance was being enjoyed, as far as I could tell, by two more elderly gentlemen sat on a bench opposite. I made my way gingerly round the back of the bench before hurrying onward to the stadium.

“Sit anywhere” I was told at the ticket office. Before finding my seat I stopped for refreshment at the kiosk outside. I was quite confident of being able to quench my thirst with an early evening beer but all that was on offer was Coke and popcorn. Thus I entered the ground with a 15 yuan Coke. The appearance of a foreigner seemed to provoke much hilarity at the kiosk (perhaps at my paying 15 yuan?) and a group of curious young boys stood looking at me in some amazement.

I took my seat two minutes before kick-off and I was able to select among many options. The stadium’s capacity is over 36,000 but I doubt if the attendance exceeded 5,000 by very much. Here in the crowd was the least crowded place I’d been all day in Beijing. 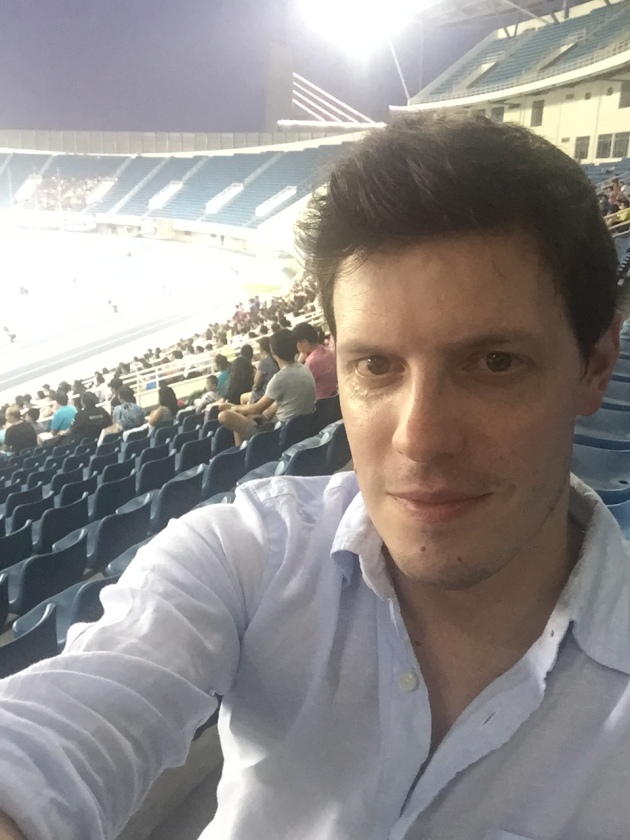 There were police officers sat on small plastic chairs watching the crowd. They were spaced evenly around the perimeter of the pitch, which meant that many of them were watching entirely empty parts of the stadium.

The grass was very long and the early touches of the players reminded me of golfers playing out of the rough. Their short game was good though and overall I was impressed by the level of technical ability.

The Beijing ultras, a rather small group admittedly, were congregated behind the far goal bearing a banner that read: the eagles soaring on the north stand. They were enthusiastic but not especially loud.

There was a group of children in the back row of the ultras section, not quite in their teens yet. Ultras in training, presumably.

After 10 minutes Wuhan took the lead – a well-directed header following a short corner. This turn of events was something of a surprise because even after 10 minutes it was obvious that Beijing were much the better side.

The travelling Wuhan support behind the opposite goal, were understandably ecstatic. Their banner read simply: Forza Wuhan. When I noted that fact on my phone, autocorrect tried to change Wuhan to Wigan. Forza was considered correct.

Ultraism truly is a global Italian brand, embraced as willingly by the Chinese (and others) as they’ve embraced brands such as Prada. The major differences are that Italian ultras are louder, more violent, and more likely to actually be wearing Prada.

The distance between Wuhan and Beijing is 1,200 km. Being an away supporter in China, ultra or otherwise, takes commitment.

The standard of the game was decent, the standard of the ball boys rather less so. These were pretty young kids to be fair, probably 8-10 years old, but the simple task of retrieving the ball and returning it to the pitch consistently proved a struggle. Usually they would work in pairs or trios, resulting in several balls being sent onto the pitch at once.

Right on the stroke of half-time, Wuhan increased their lead. The goal was all the more surprising for being a Beckham-esque effort from the vicinity of the halfway line. The goal-scorer earns plaudits for his audacity; the goalkeeper deserves pelters for his comically flailing attempt at a save.

I described the goal as coming ‘right on the stroke of half-time’ but remarkably there remained sufficient time within that stroke for Beijing to pull a goal back. After which, the half-time whistle was immediately blown.

The police maintained their position during the interval but were permitted to stand, thus giving some of them a more elevated view of empty parts of the stadium. Meanwhile adverts were broadcast very loudly on the big screen, including for beer, which didn’t improve the taste of my flat 15 yuan Coke.

I was left to wonder what supporters in China do at half-time without Facebook; the China chapter of that particular book remains closed.

Not long into the second half and Wuhan had a player sent off. From here on in, there’s would be a largely rear-guard action. Beijing resumed the dominance that they had displayed for most of the game but struggled to make good use of the extra space that had opened up with their man advantage.

Time ticked on and all of Beijing’s huffing and puffing was not shaking the foundations of the Wuhan house. Still, unusually, I had a very confident feeling that ‘my team’ would not only equalise but go on to win. Anything else would’ve been an injustice and football of course never permits an injustice.

Parity was finally restored with 15 minutes of the game remaining. My confidence increased.

In the 85th minute: 3-2 to Beijing as predicted. The match had become a minor classic and I was considerably more satisfied with the value for money being provided by the ticket price than that of the Coke.

That feeling only strengthened a few minutes later when Beijing scored again to make it 4-2.

I stayed to the end to celebrate victory as did almost the entire crowd. One exception was an incredibly glamorously dressed woman who had arrived late. She sat alone and spent most of the match taking selfies. Occasionally she would glance in the direction of the action. She left with about twenty minutes remaining and Beijing still trailing 2-1.

I’ve no idea where she went afterwards. I went back to my hotel with a scarf that I’d bought for my son. Forza Beijing, as the Chinese would say.