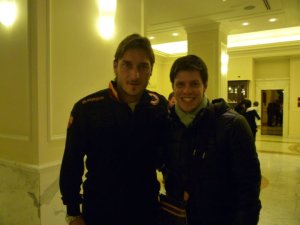 Totti and I. Milan, December 2010. Doesn’t he look pleased to finally meet me?

I support 4 teams. That probably seems like a lot so let me explain. First, there is a hierarchy. In answer to the question, “who do you support?” my answer is Dundee United. It’s the team I grew up supporting – I was a season ticket holder in my teens – and they will always remain the teenage sweetheart of my footballing affections.

I also support Liverpool, as my English team. Most football supporters in Scotland have an English team that they follow. Liverpool are mine because my best friend at school had family in Liverpool and thus he supported them. We used to watch lots of Liverpool videos together. It is 25 years since Liverpool last won the league title so at least I’m not often accused of glory hunting.

My third team is Roma. Ever since I saw my first Serie A game on Channel 4’s Football Italia in 1992 (a 3-3 draw between Sampdoria and Lazio) it has been my favourite league. Back then, it was the best league in the world. That is no longer the case but I love it still. That love used to have a universal purity about it. I just loved Italian football in general and didn’t mind too much who won particular games. It was 2009 until I went to my first Seria A game – Roma v Juventus at the Stadio Olympico. I’ve been a Roma fan ever since.

Last, and in all honestly least (but do not mistake that for a lack of passion, I speak here in very much a relative sense) there’s Rijeka. My wife is Croatian and Rijeka, the third largest city in the country, is her hometown. It is thus my adopted hometown and that comes with a duty of care toward the football team.

As summer turns to autumn across Europe (or as one slightly less rainy season turns into a slightly more rainy season in Scotland) it feels like a reasonable time to assess the start that each of my teams have made to the new season.

2015 started very well for Dundee United but it doesn’t look as though it’s going to end that way. I was there on New Year’s Day to see us beat Dundee 6-2 in an extraordinary derby. A month later, the transfer window closed with two of our best players – Armstrong and Mackay-Steven – having escaped through it to Celtic. It’s been downhill faster than a bobsleigh race ever since.

After it emerged that boss Jackie McNamara receives bonuses related to transfer fees (but is not involved in transfer negotiations), his stock has fallen quite significantly among some sections of the support. A fairly miserable run of form hasn’t helped. We currently sit second bottom of the table with just a single win from eight league matches this season.

Only two players who started the derby on January 1st were in the starting line-up for last weekend’s 1-1 draw at home to Inverness Caledonian Thistle. The current squad is barely recognisable to me. I’ll be in Scotland next month and am intending to take my son to his first ever football game. We’ll be going to Tannadice to watch Dundee United v Hearts. I rather fear that every time he asks me, “Dad, who’s that?” I will have to shrug my shoulders and say I don’t know.

He’s five years old and the only footballer he really knows and recognises is Messi. A few weeks ago he asked if Messi will be playing when we go to the stadium. Sadly not son, sadly not.

Things are not much better for my team south of the border. In fact, it’s pretty much all gone south at Anfield since Suarez left for the more southerly charms of Barcelona. I was happy to see him go such was the shame that he’d brought upon the club but it’s now very obvious that he absolutely carried that side to within a whisker of winning the league in 2013/14.

At the time, Brendan Rodgers got, and seemingly deserved, a lot of credit. Managers take plenty of flak when their team is losing so they surely warrant some praise and a little singing when they’re winning. Whatever trust there was in Rodgers though is evaporating fast around Anfield and personally, I have lost all trust in him and his methods.

Remarkably, it’s unclear how much influence the manager has over the signings that Liverpool make these days but it’s already evident that another summer of big spending is not likely to stave off another winter of discontent. Liverpool currently look miles away from being contenders for a Champions League place but rather less far away from League Two side Carlisle, who we scraped past in the Capital One Cup this week. On penalties.

I simply can’t see Rodgers turning things around sufficiently. Earlier in his reign, the possession philosophy that he espouses looked as though it could develop into something exciting. Indeed, it briefly did as Suarez, Sturridge and Sterling (ably supported by Gerrard) menaced defences with their skill, pace and speed of thought. Now though, it just appears ponderous and visiting defences can scarcely believe how easy an afternoon out they’ve been treated to at Anfield.

Talking of scarcely believable: Mark Lawrenson. On the 20th of September, Lawro wrote a column on the BBC website declaring that the 1-1 home draw with Norwich represented ‘fresh hope for new-look Reds.’ Really? Where he saw freshness, hope and something a bit different, I saw a stale, hopelessly inadequate performance that was eerily similar to many such performances in recent times.

Much of Lawrenson’s analysis seemed to be based on the fact that Liverpool had far more touches in the final third in their game against Norwich than they managed the previous week. That game was away at Manchester United. Thanks for picking up on such a subtle and unexpected phenomenon there Mark. He also provided a couple of diagrams to illustrate the point for anyone who’s a little bit slower than one of our centre halves.

Lawrenson is nothing if not a man of firm and unwavering opinions. He wrote another column yesterday. Now, apparently, “Liverpool have gone back to being a bit rudderless, characterless and seem to have lost their way.” No freshness, no hope, Mark? Not much else either.

“No rhyme, no reason, no pattern of play. Liverpool had 40-odd shots and most of them were from outside the box. Carlisle, middle of League Two, kept them at arm’s length. It was very samey. You are looking and thinking ‘what the hell is happening here?”. From “new-look” to “very samey” in just four days.

Much more of the same and it will be the dug-out that has a new look. Klopp is available and rumour has it he’s interested. Things definitely wouldn’t be too samey under the German.

And so to Rome. When in Rome … support Roma, as the saying goes. Or something like that. I visited the Italian capital in 2009 and I was delighted that my stay coincided with one of the biggest matches in Serie A – Roma v Juventus.

My ticket cost me €110 so it’s perhaps not surprising that I felt as though I was signing on for life as a Roma fan. At the club shop they assured me there was only one area of the ground that still had tickets available, and of course it was one of the most expensive areas. When the game kicked off with lots of empty seats in various other parts of the stadium, I had the feeling that I might have been taken for a bit of a Roman ride.

Roma lost 3-1 to Juventus that day and it seems as though they’ve been trying to catch up with the Old Lady of Italian football ever since (which turns out to be harder than that makes it sound).

Last season, Juventus did the league and cup double as well as reaching the final of the Champions League. Roma finished in second, 17 points behind the champions. Can they sustain a title challenge this time round?

The early signs are reasonably encouraging but that’s based more on the shaky start that Juve have made rather than anything particularly convincing from Roma. Last weekend summed up why Roma have come close but ultimately fallen short in recent years: too many draws, especially at home. Last weekend it was 2-2 against Sassuolo.

Totti scored one of the Roma goals; his 300th for the club. A week short of his 39th birthday, the Roma captain is a truly legendary figure. He only has one Serie A winner’s medal to his name (he’s finished runner up on eight occasions) and I hope that he claims a second one next May. That would possibly make him as happy as I was when I met him in Milan in 2010 when my wife and I ended up staying in the same hotel as the Roma squad (see picture above).

Next week I will be in Rijeka, enjoying some rest and recovery after running my first ever marathon (here in KL on October 4th, and for a very good cause: https://www.justgiving.com/Craig-Wilkie/). Sadly there’s no domestic football on while I’m there but there is an international fixture – Croatia v Bulgaria in the European Championship Qualifiers – so I might make it to that.

Rijeka’s stadium, Kantrida, is the most beautiful location that I’ve ever watched football in. Cut into a cliff on one side, with the shimmering Adriatic Sea on the other, it’s a glorious setting for the beautiful game. The football of course is not always quite as spectacular as the surroundings but the last couple of seasons have brought much to cheer for Rijeka fans, including two excellent runs in the group stage of the Europa League.

Last season a title charge looked a real possibility but Rijeka fell away slightly in the second half of the season following the sale of star striker Kramaric to Leicester. I expected him to take the Premier League by storm but so far he’s been a whole lot less than prominent. In fact, I’m almost certain that there are streakers who have spent more time on the pitch than Kramaric this season.

Dinamo Zagreb went on to win the league and finished the season unbeaten, the first time that’s ever happened in the Croatian top flight. Few would bet against Dinamo retaining the title and their 2-1 victory over Arsenal in the Champions League suggests they might even be a force in Europe as well this year.

Nevertheless, Rijeka are off to a reasonable start (despite exiting the Europa League in Aberdeen) and currently sit in second place, five points behind Dinamo but with a game in hand.

All four of my teams drew last weekend; I didn’t get to feel the exhilaration of victory but at least I avoided the despondency of defeat. They all have winnable matches this weekend so I’m expecting three points to be collected somewhere.

Those then, are my teams. I’ll support you ever four.