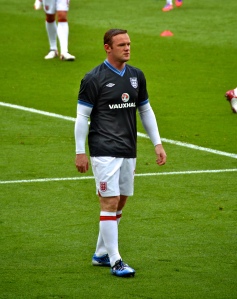 Wayne Rooney is set to win his 100th England cap next weekend in the European Championship qualifier against Slovenia at Wembley. He will do so as captain. He was handed the armband following Steven Gerrard’s retirement from international football after the World Cup in Brazil.

Rooney is a player who divides opinion. For some he remains one of England’s few genuinely world class players and the most natural leader of the current England side. For others he’s a shadow of his former self who scarcely deserves a place in the England starting line-up.

I certainly think it’s true that he hasn’t fully fulfilled the promise that he showed when he burst on to the scene as a precocious teenager. With the exception of the European Championships in 2004, he has generally disappointed somewhat on the biggest stage at the very highest level.

There seems to be something a bit less swashbuckling about him these days which is not entirely explicable by the passing of years. The look on the faces of the defenders he faces has changed a little: a respectful wariness has replaced fear.

On his day he can still command a game but when he receives the ball these days there doesn’t seem to be quite that same anticipatory shift forward in the seat among the crowd. Di Maria is the one more likely to induce that movement at Old Trafford now. With England, Sterling is a more likely candidate.

Rooney has matured though. On and off the field he no longer embarrasses himself in the way that he once did. He appears more in control of himself, maybe a little bit too much in control sometimes. The leash has been shortened and he’s more disciplined but less dangerous.

Sir Bobby Charlton will present Rooney’s 100th cap (I’m not entirely sure of its origins but a cap has always struck me as a slightly odd thing to reward people with for international appearances). Rooney is a mere six goals behind Sir Bobby’s England record of 49 and there’s a very good chance that he will have overtaken Charlton’s haul by the end of the qualification campaign.

Rooney is also now captain of both club and country. He’s become an elder statesman of the game; entrusted by managers to lead by example and instruction.

Roy Hodgson is quoted today however as saying: “I worry that the responsibility is going to weigh him down.” It’s a strange thing for the England manager to say just a few months after appointing Rooney captain.

How much extra responsibility does the role really entail? The biggest decision that the captain has to make is heads or tails. Most of the other responsibilities (guiding young players, offering leadership on the pitch, communicating with the manager) would all be expected of a senior player anyway and there’s nothing to suggest that Rooney would shirk them if he wasn’t wearing the armband.

British football tends to inflate the role and importance of captain. I get the impression that it’s seen a bit more ceremoniously elsewhere. The fact that Rooney was seen as such an obvious choice for both Manchester United and England says more about his teammates at club and international level than it does about him.

Rooney will probably become England’s all time leading goal scorer. England will definitely qualify for the European Championships in France. Once there, Rooney and England will be respected but not feared by their opponents.

If Rooney does appear weighed down, I don’t think it’s the burden of captaincy that’s the cause. I think it’s much more likely to be the fact that he knows that considerably more of his career is now behind than in front of him and the heights he’s reached, impressive though they are, have fallen short of those that he hoped for and expected.